Product is not available in this quantity.

The York Guildhall Orchestra was founded in 1980 in response to the suggestion that there were a number of very talented players in the York area who would enjoy the experience of exploring the repertoire of the nineteenth and twentieth centuries and playing it to a very high standard – and that there was an audience who would enjoy the experience of listening to such a group.

The Orchestra - Our Story 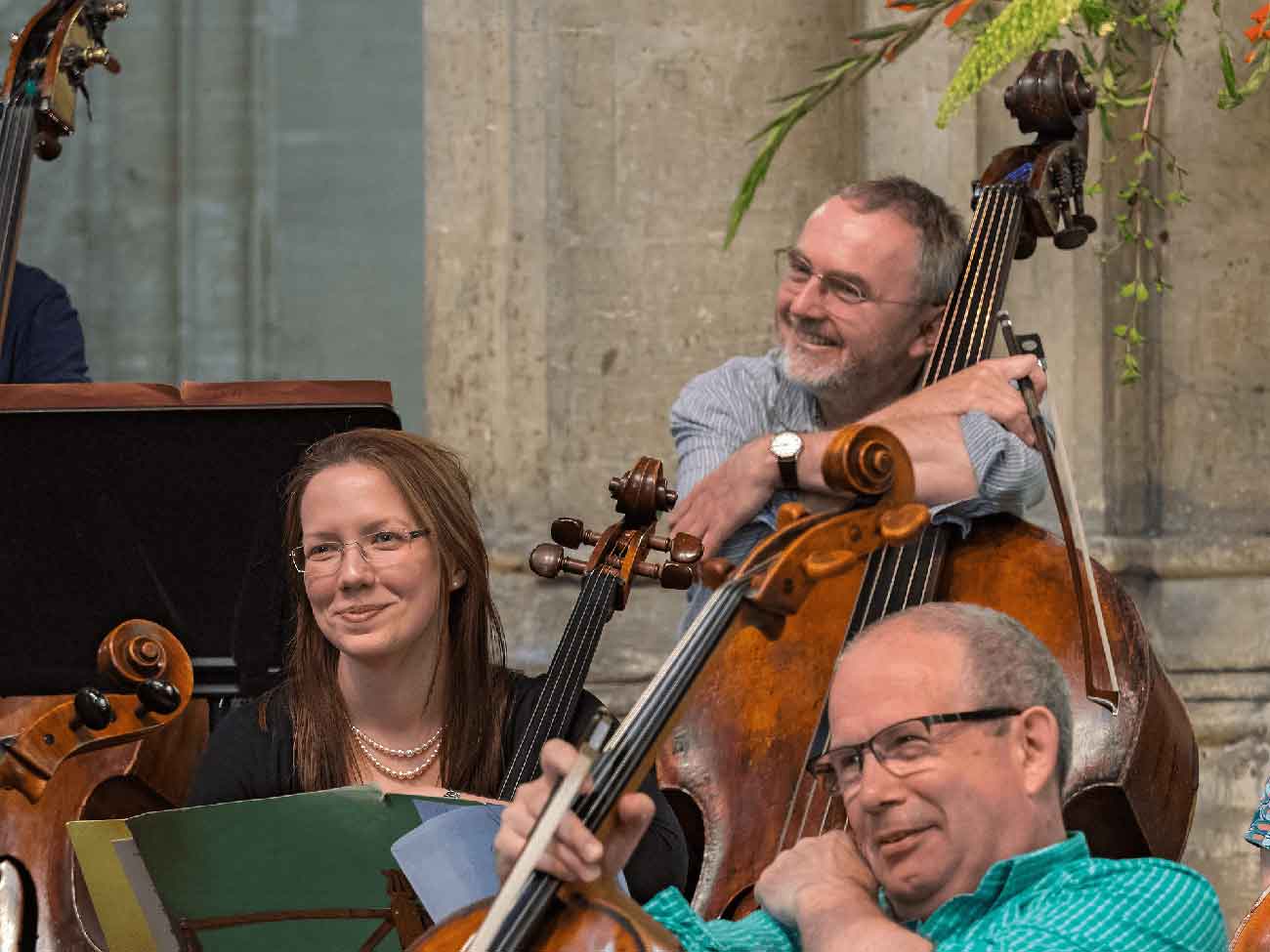 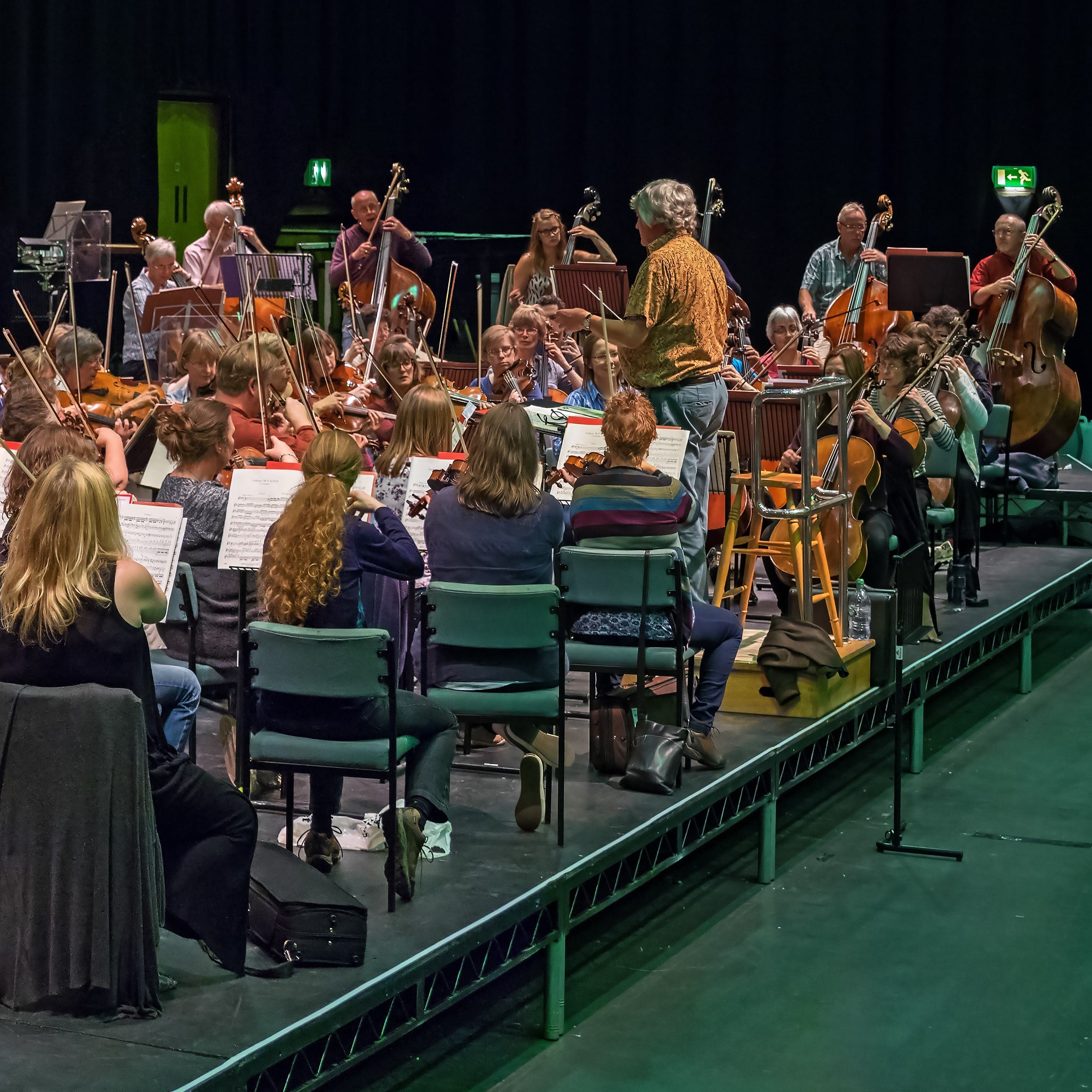 At the time of its inauguration by John Hastie (see Reflections below), the orchestra’s home was the Guildhall in York – hence the name. Since then it has given a great many concerts, most of them in York but also in Leeds, Halifax, Richmond, Beverley, Scunthorpe, Helmsley and Ampleforth.

In 1993, the orchestra was featured in two concerts at Fountains Abbey in their Music by Moonlight series. It has also been engaged for private functions and concerts. In 1992 Simon Wright took over the baton and the band became the official orchestra of the City of York – changing its name to the York Guildhall Orchestra.

Due to an ever-increasing audience size, the orchestra had completely outgrown the Guildhall and so it moved to the new York Barbican Centre.

The size and most certainly the standard of playing has grown since then; it is now comparable with many professional bands. The orchestra has commissioned and premiéred several works; for example, in 1993 it premiéred David Gow’s Marimba Concerto with Dame Evelyn Glennie as soloist. Local composer Dick Blackford has written several pieces for us as well. The orchestra regularly works with distinguished national and international soloists. Visit the Soloists Page to see examples of those have appeared with the orchestra.

In a wide-ranging repertoire, one of the orchestra’s significant achievements is probably being the only amateur orchestra to have ever played all ten of Mahler’s symphonies in chronological order! Quite a feat – there are very few professional players who could ever make that claim. The enormous 8th Symphony – named Symphony of a Thousand – required huge forces including nearly 400 in the choir, 130 orchestra players and 8 top class soloists!! It had never performed in York before – and may not be again for a long while!

The orchestra has tackled some notoriously difficult works, such as Stravinsky’s The Rite of Spring, Bartok’s Concerto for Orchestra and Strauss’ tone poems Don Juan and Till Eulenspiegel; none of these are taken lightly, even by professional groups. The orchestra has featured in the Ryedale Festival and has performed some notable concerts, including the truly spectacular Berlioz Grande Messe des Mort, with its huge orchestra of over 120 players, an enormous choir of over 300 voices (the Hallé Choir, the Leeds Festival Chorus and the Sheffield Philharmonic Choir) and four brass bands placed in quadraphonic style in the four farthest corners of York Minster.

Popular music concerts have included concerts for younger listeners, such as one with Brian Kay as narrator in various pieces. The orchestra was a central feature in a concert in 2014 to commemorate the memory of local composer John Barry – a wonderful dedication to a fantastic composer, performed to a full house in the Barbican.

In accordance with it's charitable status and purporse, the orchestra works closely with the York Music Hub in an effort to involve talented youngsters in it's music making. School students are invited to apply for the opportunity to play with the orchestra at their first rehearsal - see Student Players. The orchestra also arranges for the soloist for a particular concert to hold a Masterclass on their instrument for any aspiring young player - quite an opportunity.

The orchestra also works closely with it's principal sponsor, York St John University, in giving oppportunities for music students to both play with the orchestra, have their compositions played through, or be given a chance to conduct - under Simon's exacting tutelage! 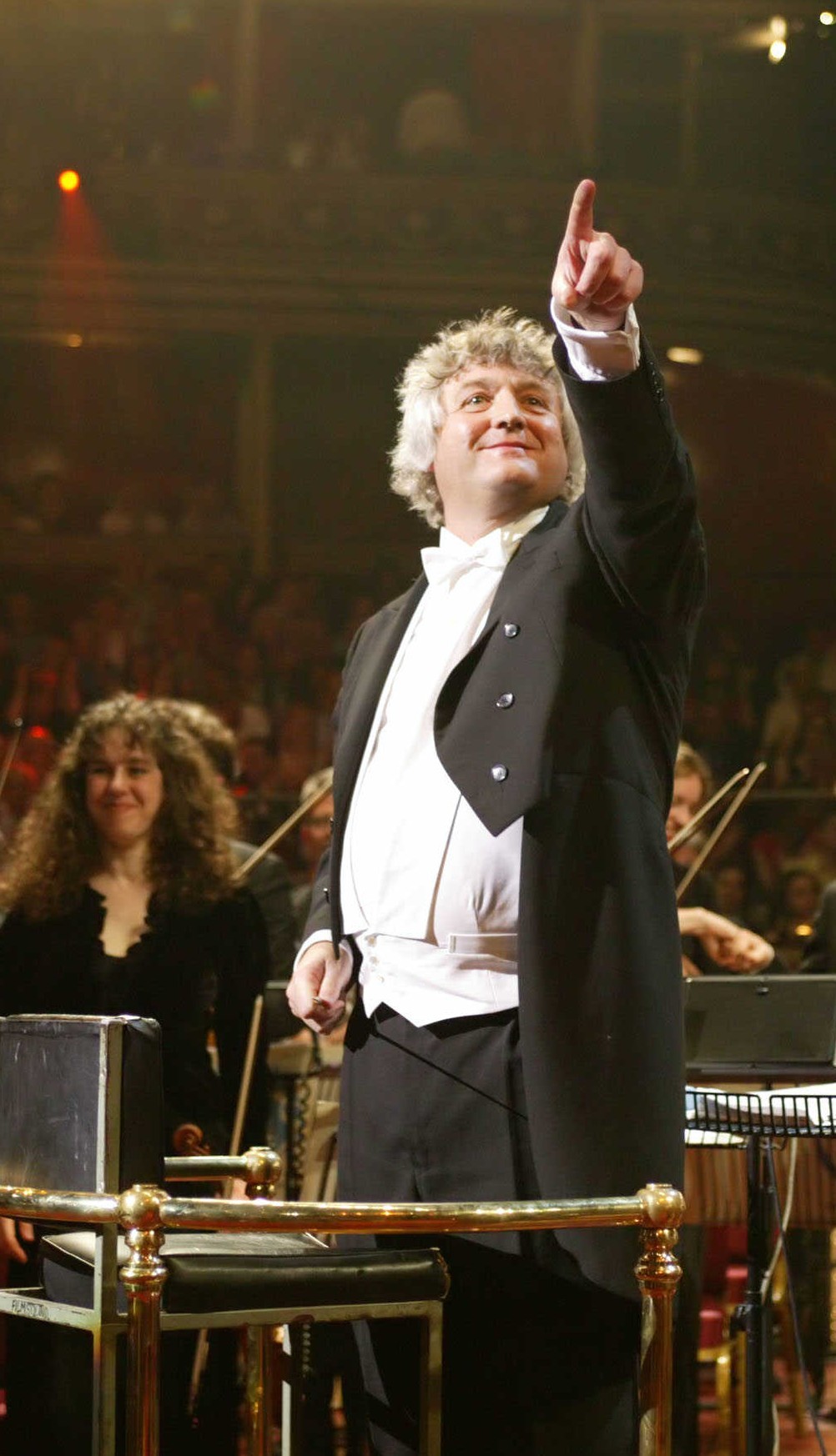 As a conductor Simon Wright has earned universal respect and acclaim for his interpretations of wide-ranging and of challenging orchestral and choral repertoire. Throughout his professional career, which has also embraced roles as organist, accompanist, arranger and teacher, he has become established as a musician of enormous integrity, winning the admiration of musicians, audiences and critics alike.

A prize-winner in the 1986 Leeds Conducting Competition, Simon has been Conductor and Artistic Adviser of the Leeds Festival Chorus since 1975 and Musical Director and Principal Conductor of the York Guildhall Orchestra since 1992.

Recordings, both as conductor and keyboard player, with John Wallace OBE, the Wallace Collection and with the Philharmonia form a major part of his discography which includes recordings on the EMI, Nimbus, Collins Classics, GMN and IMP Masters labels. In 2003 he made his début with the BBC Scottish Symphony Orchestra, conducting a recording of British trumpet concertos with John Wallace, a recording which was released on the Sanctuary Classics label in January 2006. In January 2006, Simon made his début with the Bournemouth Symphony Orchestra and Chorus recording Elgar’s Music Makers and Sea Pictures with Sarah Connolly for Naxos. This recording was released in December 2006 and was nominated for a 2008 Grammy Award.

Recent among his European engagements have been recordings and concerts with the Philharmonisches Staatsorchester Bremen and the Philharmonie und Kammerphilharmonie des Mitteldeutschen Rundfunks Leipzig. Recent engagements have also taken him to the USA, Canada, Italy, France, Germany, Switzerland and Spain as well as to the Caribbean with the English Chamber Orchestra, Viktoria Mullova and Mischa Maisky and to Oman. For four years he conducted the English Chamber Orchestra at the Classical Brit Awards and broadcast on national television, working with Plácido Domingo, Dame Kiri Te Kanawa, Renée Fleming, Bryn Terfel, Andrea Bocelli and Sir James Galway.

In July 2018 Simon was awarded an Honorary Fellowship of York St John University. 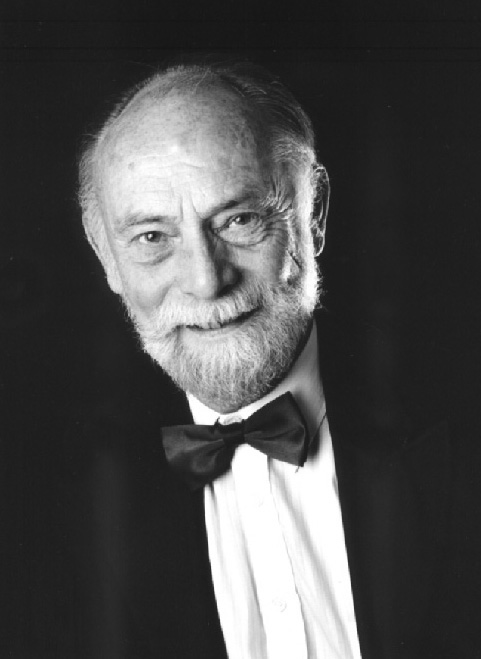 “In 1977, I had the great pleasure of conducting a performance of the Verdi Requiem in York Minster given by the choirs of all the Quaker Schools in the country.I was a comparative newcomer to York, having taken up the appointment of Director of Music at Bootham School in September 1975, and knew little of the orchestral life of the city.  During the planning of this epic event in the early months of my appointment, it became clear the choir would exceed 300 youngsters, and that although I could expect some instrumental support from the schools, it seemed more sensible for me to attempt to find orchestral players locally.

Little did I realise, as I set out to make contact with the many players who lived in or around York, just where the journey would lead me, nor just what a treasure-house of orchestral excellence York truly was in those days; it still is.  In the event, I assembled an orchestra of 80 players who came together for a short but intensive period of rehearsal (five rehearsals in three weeks).

Together with a choir of 385 and four professional soloists, we gave a memorable account of that truly stirring work.“ Of course the focus of that event was on the involvement of the young singers, but as the dust settled it did occur to me that it would be perfectly possible to find enough good players to give a purely orchestral concert.  I subjected this notion as with so many of my ideas  to a process of masterly inactivity.  However, the following year, the committee of the York Musical Society kindly invited me to conduct their summer concert while Dr Jackson was in Australia.  It was the 150th anniversary of Schubert’s death and they were to do the Mass in A flat and the Unfinished Symphony.

Once again, I drew players together for a short but intensive period of rehearsal.  It was a chance remark made by one of the players over a pint of beer after the concert that proved to be the turning point; a remark to the effect that, whilst it was always a pleasure to be asked to play for choral works, this concert had been special because the orchestra had been able to do something in their own right.“

This remark, coupled with the very evident enthusiasm of the players, and the fact that York in the late 1970s did not hear much orchestral music from the Romantic and early twentieth century repertoire, led me to give serious consideration to the idea of putting on an orchestral concert.  Just the one!  The formula of a short but intensive rehearsal period clearly worked; it suited busy people with their many other commitments and there was no doubt about finding players who would be willing to come and play.  But I needed a leader who would commend the respect of the string section in general and the violinists in particular.  “We’re a highly-strung lot” I was told “and need careful handling”; I could imagine!  Talking amongst friends, one name constantly came to the surface; Herbert Whone.“

I went to see Bert and talked through the idea of the concert and the carefully structured pattern of the rehearsals and sectionals for both strings and wind  and the programme, Weber’s Overture to Oberon, Ravel’s Mother Goose Suite and to end with, Brahms’ Symphony No. 1. They were all works that I had studied with George Hurst and felt confident that I could bring some of that great man’s magic to them. To my delight, Bert agreed to occupy the leader’s chair and said he would “see what he could do” in the string sectional.  Such modesty!  The concert was duly set up.  The city’s then Chief Executive, Roy Howell (who was a strong and loyal supporter), gave permission for the use of the Guildhall and, better still, for the use of the name.  The Guildhall Orchestra was born.“

The one-off concert took place on 9 February 1980 in front of a capacity audience and provoked an overwhelming response from players and audience alike: “You can’t stop now!  Do another quickly.  Strike while the iron is hot”. And from the brass players came a special request for something a bit more exciting “Try Tchaik. 4” they said: “give us something to do”.  Another date was found and shortly after Easter we gave a concert “To Celebrate the Arrival of Spring” with Delius’ On hearing the first Cuckoo, Copland’s Appalachian Spring and Tchaikovsky Symphony No.4.  They had plenty to do!
‍
“Now there was no turning back.  Bert, who had already shown his great gift of being able to convey the gesture behind the written notes in a really inspirational way, agreed to continue as leader.  Over the twelve years of our collaboration, he did more to lift and transform the standard of orchestral playing in York than anyone I know.  Players would emerge from a sectional rehearsal feeling two feet taller and brimming with confidence.  Even I, whose string playing expertise is zero, would leave Bert’s house after a three hour bowing session in which Bert would have played every note of every piece explaining how and why it was done that way, believing that I could pick up a fiddle and make music.
‍
“The rest is history and will perhaps one day be written.  Suffice to say that during the late 1980s, I recognised that the orchestra needed a musical director who would be able to lift them from the point we had reached onto the next level, and so a search for my successor began. During this time, I was able to take “my band” into the newly-completed Barbican Centre and establish them there before handing over the musical future of the City of York Guildhall Orchestra to the safe baton of Simon Wright.”

We have some wonderful music to present to you.

Join us at one of our future concerts in this, our 42nd Season and be part of our music-making.
Please visit the What's on page for more information.